Former Deputy Minister of Finance Terence Mukupe has alleged that a faction of ZANU PF opposed to President Emmerson Mnangagwa may be responsible for the death of the late General Solomon Mujuru who was burnt to ashes in 2011 at Alamein farm.

In a video which circulated on social media on Monday Mukupe says he was instructed to participate in a plan to pass a vote of no confidence on President Mnangagwa or risk going the way of Solomon Mujuru.

Mukupe also revealed that there was factionalism in ZANU PF with the faction opposed to Mnangagwa calling the youth looters.

The verbatim translation of Mukupe is as follows:

They say down with youths, youths are looters; without even coming to see and talk to them; if you are told your children were beaten and were injured why fail to see them and hear for yourself what happened?

Why should you rely on social media? And the wounded youths where at the ZANU PF HQ but no one bothered to go there. That is when you realize that some people are only interested in getting leadership positions, and nothing else.

To me the injured youths are heroes. When I said this openly, I started receiving threatening messages that I should toe the line and support someone whose name was given as there were plans to move a vote of no confidence on Mnangagwa.

I was warned that if I did not support this, they would do to me what they did to (Solomon) Mujuru.

I told them I did not join ZANU PF to earn a living but that I did so out of my conviction regarding the ideals of the party. I know the person who is in power and whom the people voted for and who is doing his job well.

So if they want to burn me to death, they can come here is my address. 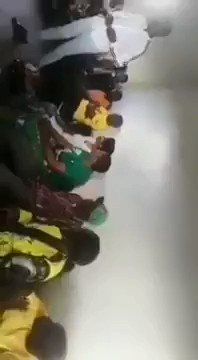 This @tmukupe video clip shows that Mnangagwa & Chiwenga factions in the Army, Police, CIO & ZanuPF hijacked the #JanuaryStayaway to create conditions for & against a vote of no confidence in Mnangagwa by unleashing unprecedented violence; now being blamed on victims, MDC & NGOs!