Former President, Robert Mugabe’s son in law, Simba Chikore was arrested last night at the Robert Mugabe International Airport and is currently in police custody, according to state media sources. 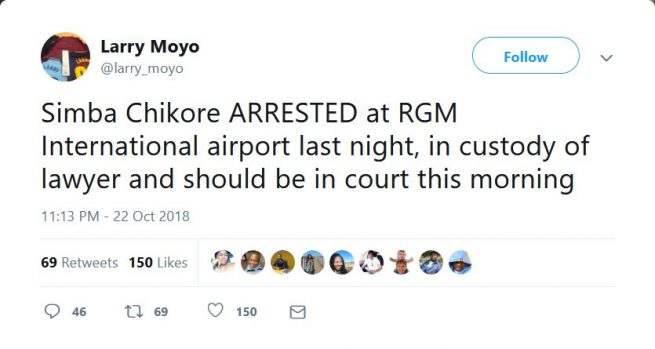 Chikore, was reported by prosecutors to be “still at large” when his co-accused, Simbarashe Mutimbe, a security guard, appeared before a Harare magistrate on Saturday.

Mutimbe, 34, was freed on $30 bail and remanded to October 22 by magistrate Rumbidzai Mugwagwa.

It is alleged that on June 7 this year, Chikore, fired Zakeyo after accusing her of leaking company secrets.

Zakeyo, the court heard, was required to sign some documents acknowledging her dismissal and when she refused demanding that her lawyer be present, Mutimbe prevented her from leaving the premises.

Chikore allegedly locked the office and called the police, saying there was a person who was causing trouble at the company.