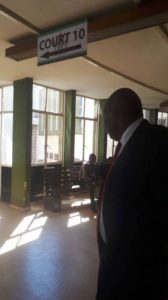 The six-month self-exiled Kasukuwere appeared in court this Friday morning.

He is facing a charge of violating the immigration act and was told to report to the police regularly.

Schools To Close Early Due To Elections

Man Stabs Wife After Mistaking Her For Lion

We are a caring and loving community: Beer lovers church donates to Masembura ophanage

He is disrupting her education: Father drags daughter’s lover to court