Sensational Zim dancehall chanter Nicodemus Mutize, popularly known as Jah Signal caused a stir with his superhuman jumps during his performance at the National sports stadium at the Tuku Send-off concert over the weekend.

In a tweet by media personality MisRed (Samantha Musa), MissRed marvelled over Jah signals ability to jump to such heights, asking whether it was even human for him to do such.

This is not the first time the artist’s agility and athleticism have raised questions. Jah Signal last year made headlines that the artist uses performance enhancement drugs to boost his performance at shows.

The Stonyeni hitmaker dismissed these claims stating that he was a God-fearing man which is rooted in his upbringing.

“I don’t take drugs or BronCleer cough syrup but I was born a natural dancer. I am an artist as well as a dancer and that makes me different from other Zimdancehall artistes.” said Signal.

In a hilarious comment on social media, led to the question that his jumping antics could explain what he did before he took up music as a career.

”maybe we need to find out before singing aitei, athletics or some other job that requires one to skip over barriers easily.” commented Charles Cherenetso. 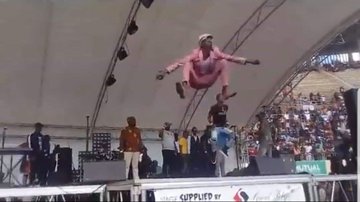 Can we talk about this @jahsignal48_jah jump though…. is it even human?!? Or like he has super human abilities… cos I TRIED That jump….. braaaaaa!! #Nah

Zim Lawyers “Flood” The Streets In Protest Against Compromised Judiciary System, Lack Of Rule Of Law