Eight Zimbabweans were killed when an overloaded Iveco mini-bus they were travelling in was involved in a road accident between Bloemfontein and Cape Town on Saturday morning. The incident occurred at around 5am along the N1 Highway, one of the major roads linking South Africa and the rest of SADC.

The road has become a death trap for many road users with over 30 Zimbabweans having been killed on the same road in the last six months.

It is reported that the mini-bus was travelling with 34 passengers, mostly minors, when tragedy struck about 25km out of Bloemfontein.

Sources close to the investigations said yesterday that the South Africa-registered mini-bus had been hired from Johannesburg.

“Eight people died on the spot ,among them five children and three adults. Their relatives are yet to be notified. One child is still in the intensive care unit in Bloemfontein while several others escaped with varying injuries. 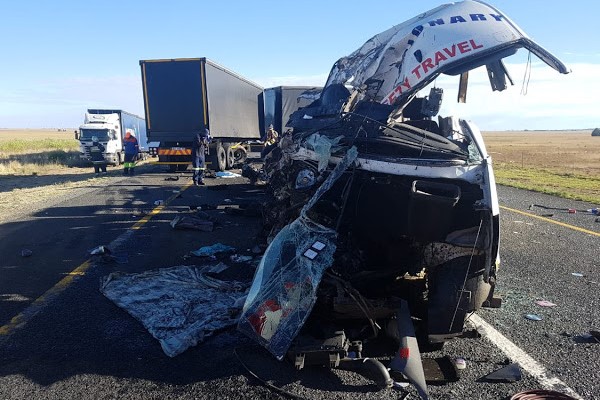 “Currently the police are busy notifying some of the victim’s next of kin,” said the source.

Free State’s Department of Police, Roads and Transport official Miss Hillary Mophethe said the driver of the Iveco had been airlifted to a hospital in Bloemfontein.

“A head-on (collision) between a truck and a mini-bus (22-seater) about 25km (Bloemfontein- Edenburg) happened on the N1 South at 04:45. At least eight passengers from the mini-bus died.

“The mini-bus was overloaded with 34 passengers. The injured passengers were taken to the hospital.

“The N1 South is temporary closed and vehicles are being diverted to the N6,” she said.

The incident comes shortly after 15 Zimbabweans were killed in two separate incidents (which occurred two days apart) along the N1 (North) Highway outside Polokwane.

The first accident involved an Intercape bus which overturned killing 11 people after the driver lost control.

In another accident that occurred near the same spot three people were killed when the driver lost control of a vehicle which was travelling from Pretoria.

Last month five Zimbabweans died following a collision between a Toyota Quantum and Sable Class (cross-border) bus they were travelling in between Musina and the border post some 10 km from Beitbridge Border Post.

Meanwhile, two Ministry of Primary and Secondary Education officials from Matabeleland South Province are feared dead after the vehicle they were travelling in was swept away by a flooded river, reports our Gwanda correspondent.

A search is underway to locate them.

Mr Masukume said Samukeliso Dlamini, who is the Gwanda District Schools Inspector, and a ministry accountant, who was only identified as Mr Nyandoro were on their way from Ntalale when the incident occurred.

Ntalale Ward councillor Coster Ndlovu said the vehicle was found yesterday morning in Mamsisi River, about 200 metres from the bridge it attempted to cross.

He said their area received heavy rains on Monday which left rivers flooded. Clr Ndlovu said the vehicle was swept away and was found by villagers.

Drug dealer swallows sachet of mutoriro after being cornered by police