Facebook Twitter LinkedIn Tumblr Pinterest Reddit VKontakte Odnoklassniki Pocket
Armed anti-riot police officers disrupted a media briefing which was organised by MDC Alliance presidential candidate Nelson Chamisa, at the Bronte Hotel in Harare. The police forcefully evacuated journalists who had come for the press conference claiming that they were following orders from their superiors. They attempted to force all journalists who were present to put away their equipment before the press briefing started.

Chamisa has challenged the results of the presidential election after the Zimbabwe Electoral Commission (Zec) declared incumbent President Emmerson Mnangagwa the winner of the election with 50.8 per cent. 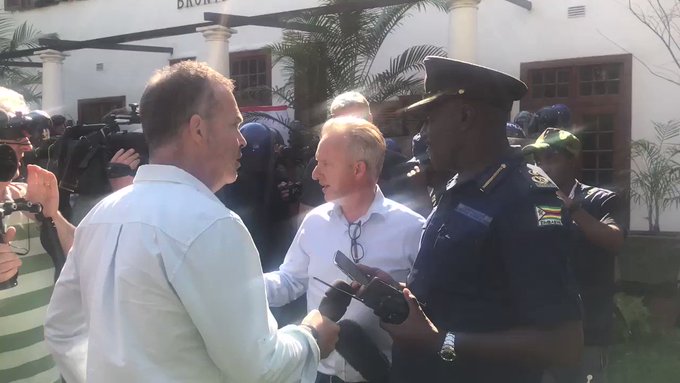 VIDEO – Breaking: Heavily armed anti-riot police stop a press conference called by @nelsonchamisa and @MDCAllianceZW to speak on their rejection of presidential results. Chaos as international are threatened by police, some MDCA officials assaulted. @hrw @povonewsafrica

Mnangagwa said they are urgently investigating the matter to understand what exactly happened. He also added that Zanu-PF won the election and has nothing to hide. Said Mnangagwa:

The scenes today at the Bronte Hotel have no place in our society and we are urgently investigating the matter to understand exactly what happened. Over the past nine months we have protected freedom of speech, of assembly and the right to criticise the government. This is an indispensable part of the new Zimbabwe. It is non-negotiable and will not change. We won the election freely and fairly, and have nothing to hide or fear. Anyone is free to address the media at any time

'My wife denies me se_x, she makes one meal a day for me' H0rny sekuru cries in court